Georg Sporschill’s life began in 1946 in Vorarlberg, where he grew up in a family of nine children. After graduating from high school, he studied theology, pedagogy and psychology in Innsbruck and Paris. He then worked as a consultant for adult education in the Vorarlberg state government. At the age of thirty he entered the Jesuit Order and two years later was ordained a priest. As a young chaplain in Vienna-Lainz Fr. Georg Sporschill SJ founded and accompanied many youth groups. From 1980 his commitment applies to punished, drug-addicted and homeless young people. He founds the Caritas Youth Centre and three other shelters for the homeless. He sends the “Canisibus” with soup to the homeless and opens the “Inigo” restaurant in Vienna’s city centre, which gives long-term unemployed people work and self-confidence.

In 1991 Fr. Georg Sporschill SJ went to the street children of Bucharest on behalf of his order. What was meant to be a six-month assignment became a life task. Together with Ruth Zenkert he founds CONCORDIA social projects and fetches thousands of children from the streets and canals of the Romanian capital. For them, a social centre, children’s and youth houses, training workshops and vocational schools are being built. “We go where the need is greatest”. This principle leads Father Georg Sporschill SJ 2004 to the Republic of Moldova. Here he is committed to orphans and neglected young people. But old people also suffer great hardship here. This is why CONCORDIA is building a network of soup kitchens and social centres. In 2008 Father Georg Sporschill SJ starts his work with children, teenagers and families in Bulgaria. In 2012 P. Georg Sporschill SJ and Ruth Zenkert founded the association ELIJAH in Romanian Transylvania. From now on he devotes all his energy to this new task: helping the local Roma, especially the children. 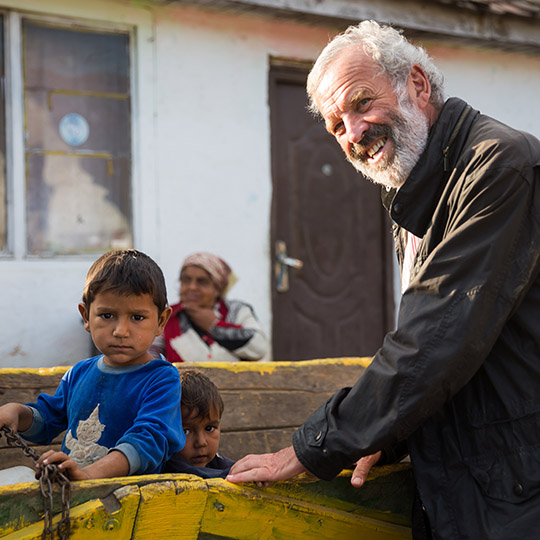